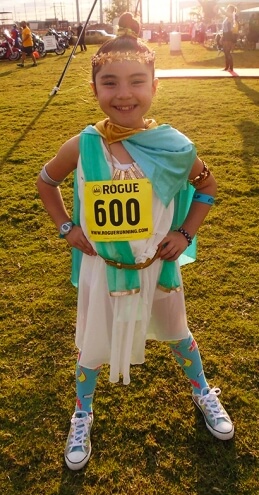 That's just who Lucky is, curious, tenacious and gifted with unparalleled energy and drive to accomplish the things she cares about. Every year she has five Halloween costumes, from Audrey Hepburn to Gene Simmons to Frida Kahlo. She has learned Mandarin ("My mom gave up learning with me the first week. I kept correcting her," she said), takes Tae Kwon Do six days a week, attends film and dance camps and has already started going on college visits. Lucky Cantu is impressive.

But even more striking than her many accomplishments is Lucky's desire to help others. Every year she invites friends to come to her house to make bags of food to hand out to the homeless. At her Tae Kwon Do studio in her position as a Junior Leader, "Master Lucky" helps teach the younger kids. The position was created specifically for her to help channel her energy after she was caught trying to help the older kids with their form.

Fortunately for us, one of Lucky's favorite ways to help others is through the CASA Superhero Run. She's been part of the race for seven years, back when it was it was still called the Speak Up For Kids CASA 5K, when her mom pushed her in the stroller. As she got older, Lucky started fundraising for CASA as well, asking family and friends to make donations for the race instead of giving gifts for her birthday. "It makes me feel better that I'm helping someone for my birthday," she explains. "I'd rather give than get."

Lucky starts about a month before her birthday, August 10th, and emails every week up until the race. Right now, Lucky is the top fundraiser for this year's CASA Superhero Run. She knows the simple truth of fundraising. "They are giving because they love me," she explains, acknowledging that most people wouldn't have the same passion as her for the cause. But she is proud that, with her fundraising, she has convinced family and friends to get involved. "The kids suffered from hard things and most kids don't even know what that feels like," she says. "It feels good to be able to help them."

On race day, Lucky is a star. Over the years she has been Wonder Woman, Spider Girl, Bat Girl, Underdog, Fashion Hero and a Greek Goddess Hero, which she chose after having a Greek Goddess birthday party. This year, her party's theme is Dragons and Ninjas and she is very excited to wear her Ninja Warrior costume to the race. She's won the costume contest three times.

During every race, Lucky sees the friends that she's made over the years, people she runs into and a friend she made at the race when she was four, who she makes sure to get a picture with every year. Like many other things in her life, though, the race comes back to one thing, helping others. "Helping people is just what I do. I want kids to have a special someone who helps them in their life," Lucky says, glancing up at her mother and smiling. "I have my mom. She's my special someone."

Want to support Lucky for her birthday? Visit her CASA Superhero Run fundraising page. Interested in running the race yourself? Register today at www.casasuperherorun.com.