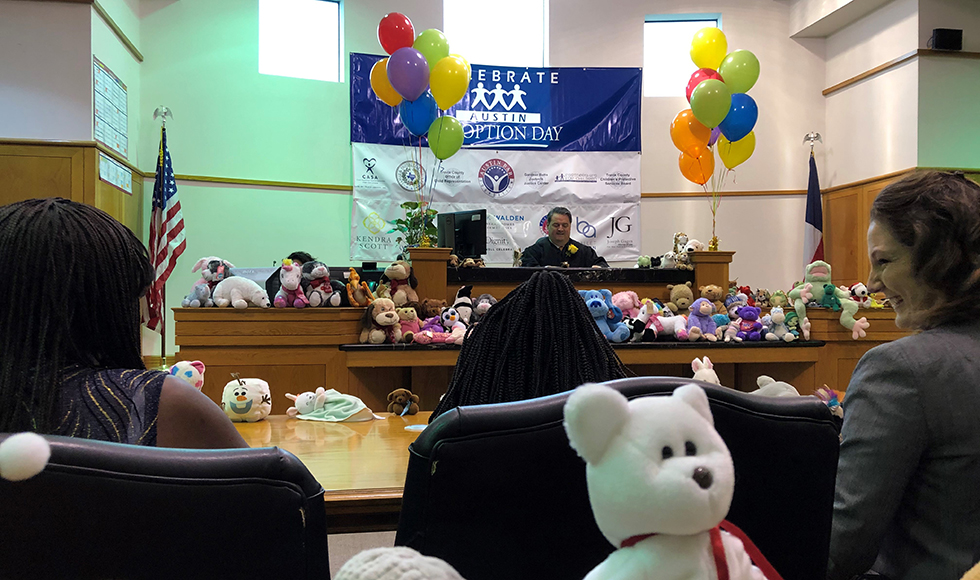 Celebrating the Relatives who Became Parents at Adoption Day 2019!

Last Thursday was Austin’s annual Adoption Day celebration, hosted by the Austin Bar Association. This event is always a joy-filled day as relatives and non-relatives alike officially formalize the adoptions of their children into their forever families. 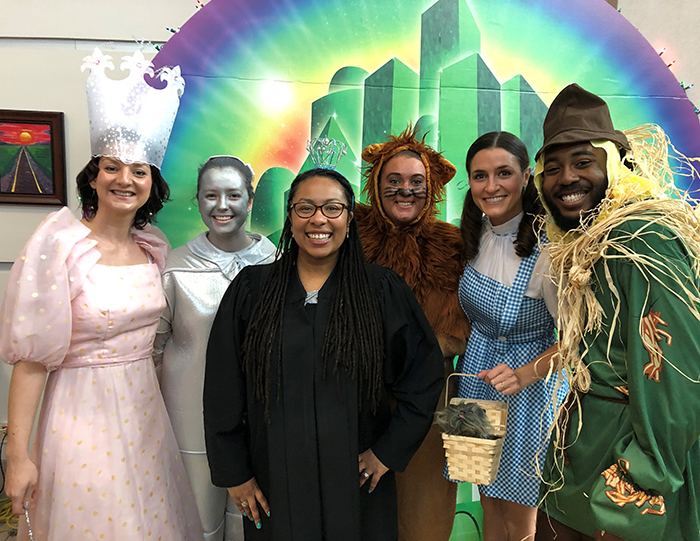 This year was a special celebration of the relatives—grandparents, aunts, uncles, stepfathers, fictive kin and more—who stepped up to become parents to kids in need. Every single one of the 11 cases that CASA was appointed to on Adoption Day involved relatives adopting their family members, and keeping kids connected to their family and their community.

Becoming an adoptive parent is never easy, and especially so through the child welfare system. It takes sacrifice and hard work to meet requirements, pass home studies and ensure the needs of kids from hard places are met. Some families even have to make the hard decision to separate from a daughter/son/brother/sister/husband/wife who originally put a child in harm’s way, in order to best protect their newly-adopted children.

“[She] is his mother. They’ve been together for his entire life, as long as CASA has known him."

We commend the work of these relatives who have now officially become parents. As The Honorable Gisela Triana put it on Adoption Day, “I can’t make you a family, you are already a family,” recognizing the tremendous work they’ve done as she signed off on the paperwork to make it official.

CASA volunteers, judges, attorneys, and CPS caseworkers all offered beautiful messages of thanks to these relatives/now parents on Adoption Day, and we wanted to share these inspirational moments with you today!

To a grandmother who has cared for her grandson since he was 3 days old:

“[She] would do whatever, whenever for this child. She’s made life-changing decisions so he can remain with her. He’s completely and utterly bonded with her. There’s no other place for him.” - CPS Adoption Caseworker

“[She] is his mother. They’ve been together for his entire life, as long as CASA has known him. She can fulfill all his needs: physical, emotional, medical. I’ve seen them together, they’re very attached. I wholeheartedly endorse [her].” - CASA Volunteer

On a side note, this little boy halted the adoption proceedings because he saw a Moana doll in the toy-filled courtroom that he had to have. The judge granted his request for Moana.

To a stepfather who adopted 3 of his stepchildren when their mom was no longer in their life:

“Any question I had for him, anything that needed to be done for the kids, he was on top of it. If he didn’t understand something [required by the CPS system], he asked questions… how do I do it, when do I do it. The children love him and he loves them very much. They have a strong relationship.” - CASA Supervisor

“I consider him a super dad. He’s done so much as a single parent. He’s always on top of therapy, appointments, school. We appreciate everything he’s done to get here today. It was a lot, but even with a full-time job and being a full-time dad, he pushed so hard.” - CPS Caseworker

Both CASA and CPS noted that it smelled amazing every time they would visit the home because he was always cooking something delicious for the kids!

To the grandparents who adopted their 8 grandkids:

“You are all amazing. Your dedication and your love… I know they bring as much to you as you bring to them. You are just a guardian angel.” - Attorney

“I have really admired how [the grandmother] has handled all of the appointments, all of the school needs, and the care for each of these kids. There’s a lot going on and she’s done a great job of staying on top of all of these issues.” - CASA Volunteer

The children were asked if they wanted to share anything, and one of the little girls said, “I want to thank my CASA volunteer because she was there when we needed her. Thanks to them we are all together now.”

“I just want to thank the entire system, especially CASA, the attorneys, the judge. Everyone who gave us support and helped us out, everyone who was involved in my grandchild’s case. I’m very thankful to everybody.”

And to the grandparents who adopted their teen granddaughter after both enthusiastically saying “Yessss!” when the judge asked if they would love and care for her as parents for the rest of their life:

“They have taken extra care to make sure she’s where she needs to be. I definitely think this family is doing everything for her.” - CPS Adoption Caseworker

“They have done everything, gone above and beyond for her. They continue to show up for her at school, at therapy... everything. It’s a safe, permanent home.” - CASA Supervisor

The grandfather/now dad asked to say something to everyone as the adoption proceedings were wrapping up: “I just want to thank the entire system, especially CASA, the attorneys, the judge. Everyone who gave us support and helped us out, everyone who was involved in my grandchild’s case. I’m very thankful to everybody.”

And we’re thankful for him and the numerous relatives who step up for their family members every day in Travis County, Texas and across the country. Of the 763 children’s cases we helped close last year, 16% were adopted by or live permanently with relatives.*

*For the remainder of the children: 63% were reunified with parents, 5% were adopted by non-relatives, 5% became adults and aged out of care, and 11% had other outcomes.