Finding Courage: Speaking up about race and ethnicity 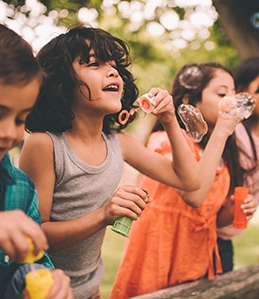 The cause of this disproportionality lends itself to numerous explanations, some of which include systemic racism, poverty and access to resources. Children of color not only enter the child welfare system at higher rates, but once they enter the system, their experience is often different from that of white children. Read more about disproportionality in the child welfare system in our recent blog.

Disproportionality, race relations and privilege play an omnipresent role in the child welfare system. The KWYA training helps CASA volunteers to recognize potential biases in the system, as well as realize potential privilege and biases that they hold within themselves, and then learn how to address them to ultimately better serve children.

“This was the most valuable training that I have been to in my life personally and professionally,” says Chanda Williams, CASA volunteer and recent KWYA trainee. “It was an eye-opening experience that allowed me to look at people and world issues with a different lens. Obviously, I understand that there are certain cultural privileges in America and in the foster system but I did not realize that so few people knew it existed and how it would impact them as a volunteer. I was also surprised at the empathy that so many of the participants expressed while going through the training.”

“I thought [the KWYA training would be] a standard lecture on ‘this is what that culture does, this is how we should show respect to all cultures…’ And it was everything but,” says CASA volunteer Jim Newhouse. “It was facts, it was statistics, it was real life stories… but more than that, it was hands-on. It was intimacy. It was hard conversations about deep, unconscious biases that we never knew we had and internalizing how and what we are supposed to do about them. It was getting to know the people around you, and their story, and sharing your own, and realizing, unbeknownst to us, just how privileged we are or aren’t. And even deeper, what are we going to do about it? How does change begin? Do we even have the courage to initiate it?”

In order to better advocate for kids in the system, we have to know how to talk to them about the issues that most don’t feel comfortable discussing with one another.

One of the main tenants of Knowing Who You Are is to become more comfortable with discomfort. This boils down to being able to have “courageous conversations” with others when you witness a moment of injustice. Having the ability to be comfortable with engaging in uncomfortable or dreaded conversations is necessary to educate others on experiences that are not shared across all races and ethnicities.

“My biggest takeaway from training was having courageous conversations,” says Chanda. “It’s important to be able to discuss with others the differences in cultures and racial identity about who they are and realize that it is a never-ending journey to develop one’s own racial identity; all while accepting others and looking at them in a positive light.”

“Courageous conversations help to facilitate growth and to check our own biases,” says Alisa DeLuna, Senior Director of Community Initiatives and KWYA Facilitator. “If we don’t take the time to see other perspectives, we could be misrepresenting the best interest of the children we serve. We don’t want to bring biases to our advocacy at CASA, and in order to do that we have to practice having courageous conversations.”

“As CASA volunteers, part of our advocacy is going outside of our comfort zone in the spirit of speaking up for kids and families,” says Training Director and KWYA Facilitator Lydia Garcia. “A family may not be in a position to speak up for themselves or have courageous conversations about a racially-motivated injustice because the microscope is already on them, and anything they say or do may impact ability to reunify. A volunteer may need talk with a potential adoptive placement of a different race from the child about what plans they need to build to help the child feel comfortable in a new community, while at the same time staying connected to their heritage. A volunteer might need to address how a home study says a placement shouldn’t be considered because of reasoning that feels prejudiced, versus reasoning that poses an actual safety risk to a child.”

The pursuit of identity is hard enough on its own. Imagine how hard it can be for a child in foster care.

At KWYA, trainers discuss with volunteers ways in which we can advocate for children in the foster care system to be more connected with their racial and ethnic identity and stay in touch with their communities. This can be especially important for children of color who may have grown up eating meals and celebrating holidays that perhaps their foster placements or adoptive homes aren’t familiar with.

“This training has helped me be more open to exploring how conscious the children I serve at CASA are of their identities,” says CASA volunteer Kim Strickland. “I can help them to explore their identities, whether it's educating myself or talking to family members about their family traditions.”

“The majority of the children we represent are from diverse or minority backgrounds. [At KWYA I learned the importance of] understanding what that [identity] means to them and becoming aware of how I respond and interact with these children and their parents,” says Stephanie McCollum. “It really changed my perspective when having conversations with parents and kids.”

It is our job at CASA to keep a child as connected to their identities as possible. In our advocacy, we can help placements see the need to ensure children feel more at ease with their surroundings and establish a sense of normalcy.  From taking a child to a community gathering or exposing them to art and films that they can identify with, there are many ways we can advocate to keep a child’s cultural connections intact.