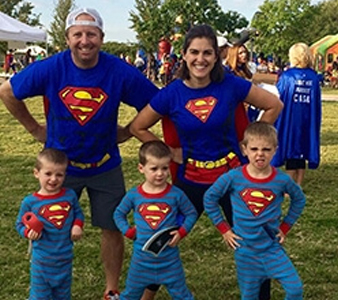 Over the past decade I've participated in fundraising for a number of non-profits ranging from dog rescue to international adoption to CASA. Along the way, I pick up a few principles that I believe apply to all fundraising efforts and are especially important and powerful when raising funds for the CASA Superhero Run.

Whether it's sadness, hope, or anger at injustice, you need a 'hook.' Begin your request by getting to the heart of the problem you're hoping people can help you solve with their donations. Try to make the problem something they can actually feel and not just a sad thing that is far removed.

2. Explain Why This Money Will Actually Fix a Problem

Most people are receiving donation requests from seemingly every direction. Why is yours different? Well, when you are asking for money for CASA, in particular, you know that donations will actually help save children's lives, change children's futures, promote family and healthy outcomes, and protect vulnerable children from falling through giant cracks in a broken system. Communicate to your friends and family exactly how each one of their dollars actually helps achieve something real, direct, and measurable.

There is nothing less inspirational than a request for money that is clearly quoting entire chunks of other people's form language. If you want to include some 'official' or example sentences about the organization and its purpose, that can certainly be helpful, but make the real meat of your request personal and authentic. Similarly, if you can include something that makes your email stand out in people's minds - say, a photo of you or your team dressed up as superheroes - do it!

Ok, now you've got their attention. You've explained what precisely their dollars can accomplish. So don't drop the ball in the end zone - lead them to the easiest and fastest way to donate. Ideally put this in multiple forms, perhaps linked text as well as the actual pasted link.  If you want to include a link for joining the race, or for becoming a CASA volunteer, you could do that in addition to donating. Make the point that everyone can help solve this problem in some way!

People are busy, bombarded with emails, and often reading on their phones. Be sure to bold, underline, highlight, etc the main points of your request. Be sure there is at least one sentence from the above pieces highlighted: an emotional sentence, an explanation of the purpose of their dollars, and a way to donate.

On this note: brevity! People don't want to read a novel. And don't distract them with typos. Make your request to the point, powerful, and well-edited. Get a second pair of eyes on it before you send it out.

To-do lists are long and people are often reticent to part with hard-earned money. Do not take a lack of response as a rejection of you or of the cause, but rather as an indication that people have forgotten the request or not gotten around to it yet. Be sure to send at least one follow-up email as well as post a version of your request on all your social media.

Just as importantly, be sure to thank everyone who supports you! Do this immediately as an email response when you see their donation come through, then send a heartfelt handwritten note later, maybe even after the race with a picture of you in costume.

7. Give Yourself a High Five

Asking for money is not easy, but as someone who cares about a cause, you are the very best person to make the case for supporting it to your friends and contacts. Give yourself a high-five for putting yourself out there for something that is important to you!

Nancy is fundraising again this year. To track her progress or see how she puts her principles to use, visit her fundraising page. To register for the race and become a superhero fundraiser like Nancy, go to www.casasuperherorun.com.