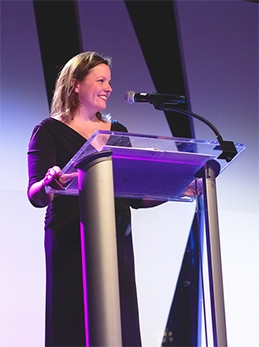 On Saturday, February 2, Board Chair Ashley Wright faced a big hurdle. She was giving the primary speech at our 26th annual CASAblanca Gala, at which we were hoping to raise $1 million for the first time. The stakes were high, and the words she would say to that crowd had a lot riding on them.

But Ashley is used to taking big leaps of faith. During college Ashley was a pole vaulter at the University of Arkansas (Woo Pig Sooie!). So she’s been tackling hurdles like our million-dollar fundraising goal for years!

After studying marketing at Arkansas, Ashley started out her career as a wedding planner in New York. She quickly changed paths—noting that she’s neither “a party girl nor a night person”—but realized that she really enjoyed the budgeting process, as well as, the organizing and working with people. She adjusted her career aspirations to financial services, received an MBA in finance from New York University and now runs a family office, where she oversees the financial investments for a local family. “I get to do a lot of fun things,” says Ashley.

Even charitable giving had its hurdles. When Ashley started working for the family nine years ago, she noticed they were reacting to donation requests and didn’t have a proactive plan to focus their giving. She wanted to help them zero in on something they genuinely cared about to affect change, and that’s how she found CASA.

Ashley not only connected this family foundation to CASA in a very significant way, she joined the board, and started advocating for a teen girl. Ashley recently closed her case and is now our Board Chair.

Ashley says that she loves CASA for the little moments—those moments that a CASA volunteer makes a significant difference in a kid’s life by doing something so simple. Her favorite CASA story is about a little boy in a foster home that had a trampoline. Foster care laws place heavy restrictions on trampoline use for a child placed in someone’s care because of safety concerns. This little boy was already missing his family and everything he found familiar. And now, as the one child not part of the biological family, he was not allowed to play on the trampoline the same as the other children. Knowing he felt singled out and even more out of place because of this issue, his CASA volunteer advocated for him to be able to jump on that trampoline, so he could at least have a sense of normalcy from playing with his foster siblings. The judge agreed with CASA, meaning the child was essentially court-ordered to jump on a trampoline! Ashley appreciates how well volunteer advocates know the children they serve. Not tied to the same rules other professionals are on the case are, CASA volunteers can advocate for unique things—particularly important to the child they serve. It’s these seemingly little things that can make a child’s time in the foster care system less tough—while at the same time being focused on safety, permanency, well-being and long-term outcomes for kids.

Now so far Ashley may seem pretty fearless: taking on million-dollar goals, leaping high into the air as a pole vaulter, advocating for a teenager in the foster care system and running a family office. But we learned that Ashley can get scared, and she reacts in pretty hilarious ways: “There’s no hope for me in the zombie apocalypse… when it comes to fight, flight or freeze, I just surrender.”

She knows this because she was often and easily pranked during college to elicit her funny reactions. In fact, she met her husband, David, when he rushed out at her from behind a haunted house dressed in a Chewbacca costume (Ashley thought it was a gorilla). When this happened, Ashley dropped to the ground, while the other girls she was with on this night of antics ran away. She thought she was facing imminent death, until she heard everyone laughing around her.

Years later, Ashley says David still likes to play pranks, but he doesn’t try to scare her anymore. They have 2 children, 6-year-old Sutton and 3-year-old Fisher. Sutton’s current goal in life is to be a superhero, ninja or inventor (she would clearly choose fight in a fight, flight or freeze scenario). “Fisher makes the world a better place by eating his way through it,” jokes Ashley. He recently ate half of a cheesecake at a party while all of the guests watched in awe. Ashley also plans to adopt from the foster care system someday. It was this interest in adoption and foster care that originally connected Ashley and the family foundation with CASA.

When not working, raising a family or volunteering with CASA, Ashley and David lead a marriage ministry at The Austin Stone Community Church.

Ashley says that she wants “to be an amazing wife and a great mom and a good friend and I want to serve my community well. I want to be a good steward of all that I’ve been given and hopefully, someday I will get to heaven and hear God say, ‘Well done, good and faithful servant.”

Ashley did help us raise over a million dollars that night at CASAblanca: $1,170,000 to be more exact. That’s enough to give 585 children a CASA volunteer for a year. We’re pretty sure Ashley is headed in the right direction for the “Well done” she’s hoping for! 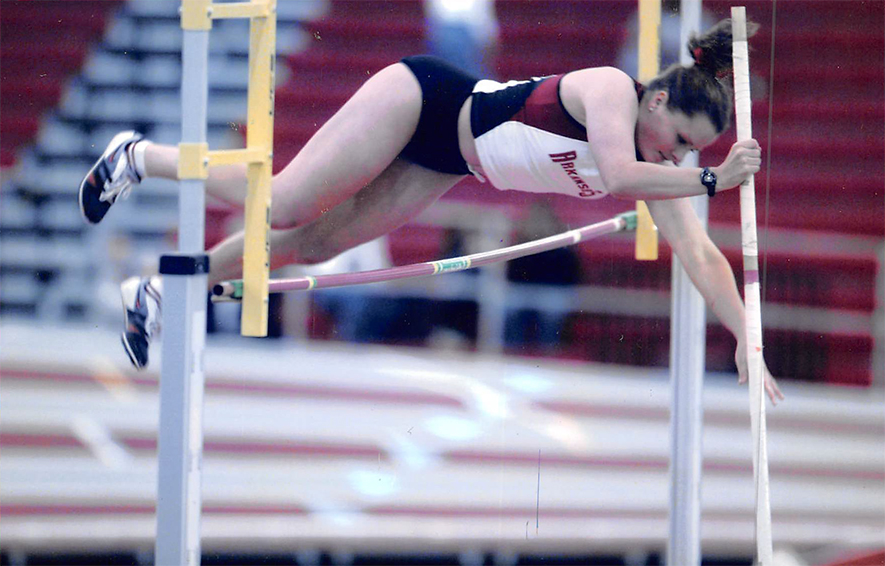 Ashley Wright pole vaulting for the University of Arkansas