This new training curriculum still offers much of the flexibility of the old system, in that it allows volunteers to select their own schedule of classes, but it better mirrors how volunteers will need to work and prioritize in their actual casework. Asking them to manage their time and plan their training over 5 weeks is more in line with a realistic workload on a CASA case.

“I think getting people through training quicker keeps the motivation alive that drove them to sign up in the first place. I’ve also noticed a lot of my newer volunteers are more proactive on their cases which I attribute, in part, to the quick carry over,” says volunteer supervisor Patrick Lloyd. Fellow supervisor Qunisha Simmons agrees, sharing, “I think they are more informed and prepared. It sounds like the training was engaging as they remembered everything. Continued commitment and engagement were the difficult challenges previously. I feel that so far [the new volunteers are] engaged and committed to the work.”

“They’re very eager. They’re very on target. They’re not afraid at their first courtroom presentation,” says volunteer supervisor Florencia Grauer of her volunteers from the new training model. She shares that one of the new volunteers “wrote a beautiful court report” on her very first attempt, something that normally takes a lot of practice to master. While volunteers have always learned about the court report process, the new curriculum devotes one of the online classes to an in-depth tutorial and samples on how to write a court report, and then has them write their own, based on model case documents they review.

Director of Training Lydia Garcia sees “trainees being more motivated when they come to in-person classes because now there are only 8 of them.” Previously they took all 12 classes in our offices, but the training team at CASA recognized an opportunity to draw in more potential volunteers by allowing them to complete some of their training time online at their own schedule. The addition of the 4 online classes has been positive: “Some people are doing the majority of the online classes in the first few weeks. They’re able to knock out classes sooner than they have before, and they have better questions in class because they’re getting material more quickly.”

We really listened to the feedback of volunteers who were missing a sense of community, since taking classes on their own timeline meant they rarely got to know fellow volunteers. “Now, because the volunteers see each other more regularly during training, they’re developing that cohort feeling we were hoping for. We’ve noticed certain volunteers sitting together in class on a regular basis, as well as volunteers who know each other and are talking more during the celebratory Swearing-In Ceremony after they’ve completed training. They feel more like part of a CASA community and that will help improve long-term retention, as well,” said Training Specialist Wendy Morse.

If you’ve been thinking about becoming a CASA volunteer, now is a great time to start. Our next training cycle begins July 23rd. Learn more at http://www.casatravis.org/volunteer.

Thank you to the Toy Industry Foundation, The Lola Wright Foundation and the Austin Bar Foundation for supporting the production of our new online training program and its video components. 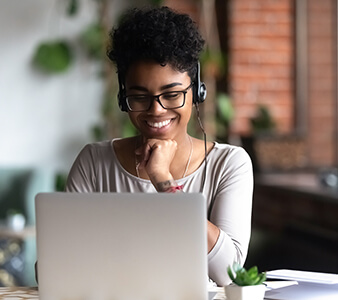 As our community, state and country are responding to COVID-19, CASA of Travis County is... 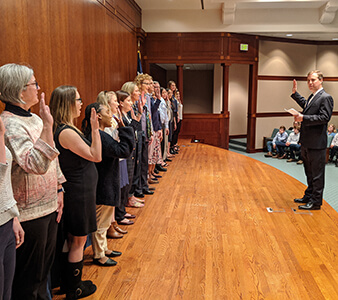 Last week at the Texas State Capitol we held our second-largest Swearing-In Ceremony ever, with...