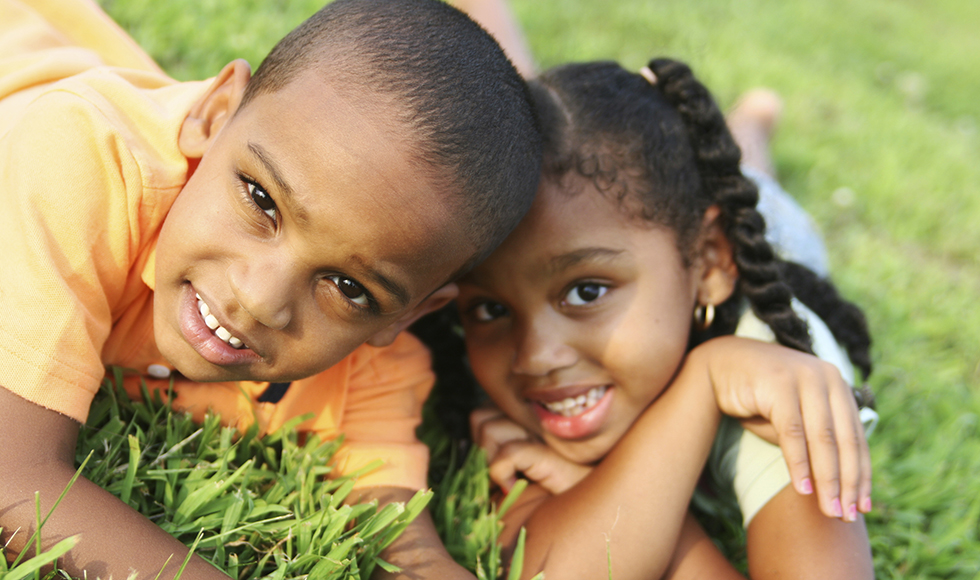 Disproportionality in the Child Welfare System: An interview with Tanya Rollins

Just starting from the beginning, since many people don't know, can you define what disproportionality is? 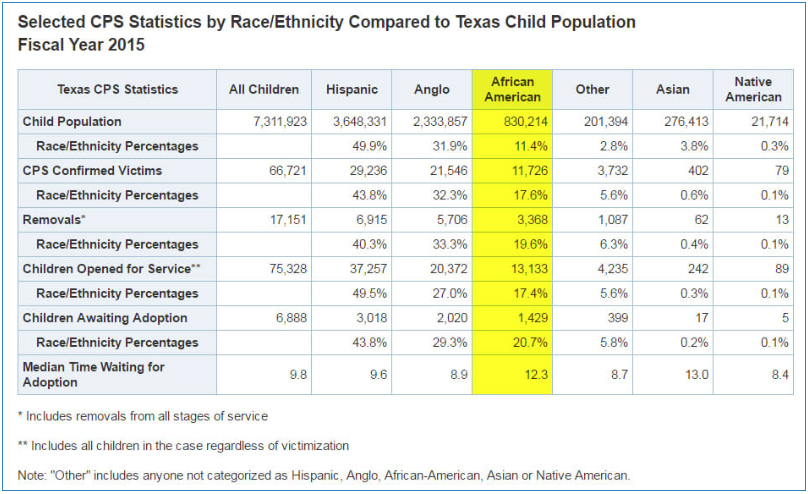 In this chart from the 2015 DFPS Databook, we see how other races/ethnicities stay similar to or drop below their population percentage in the CPS population, while African-American children's numbers rise above their proportion of the population, up from 11.4% of the population to 20.7% of the children awaiting adoption.

How does that actually play out in our system?

When we talk about disparities, which go hand in hand with disproportionality, we are looking at the unequal treatment of a particular group at different decision making points within a system. So, for child welfare that essentially means that when we look at the fact that children of color are more likely to get called into the system. That's a piece that's not necessarily controlled fully by DFPS because those calls are coming in from the public. You can see that overrepresentation has to do with some reporter bias towards people of color.

There are a lot of people who look at this issue and say this is not a problem of bias towards race, but instead it's a problem of poverty. How do you answer that?

I answer it by telling folks that it's not a binary sort of issue. It is one that has a lot of complex, different factors in it. In this country we can't separate poverty and race. So when I talk to folks about disproportionality, when we talk about racial disparities, we need to be able to talk about the racial biases that exist in systems and those individually-mediated biases at the casework level. You also have systemic biases in policies and practices that have been built into this country. We've got family risk factors like parent incarceration or substance abuse. And then you have the geographical context where people of color are more likely than their Anglo counterparts to live in areas of concentrated poverty.

"When I talk to folks about disproportionality, when we talk about racial disparities, we need to be able to talk about the racial biases that exist in systems..."

So they're all tied together. In our society, it becomes extremely easy for us to say, "Oh, it's just poverty. If they get out of poverty, this wouldn't be an issue," but when you look at disproportionality and disparities you'll see that there are decisions that are made for African American and Latino and Native American families where income level may not impact the decision. So, if you are talking about reporter bias, your income level may or may not impact whether you get called in, right? I'm a person of color regardless of what my income is.

We always want to talk about it in terms of "Race and..." Race is just that primary factor, that socially constructed lens that our society sees everything through. When we talk about poverty, we have hundreds of years worth of policies that have prohibited people of color from getting out of the poverty ranks. Even today, you still have banks losing lawsuits because they truly targeted communities of color, right? We talk about red lining, which we know still goes on. Institutional policies or sometimes practices still make it harder for people of color to get a house. All of those things line up to make mobility out of poverty even more difficult. And so, I often say to folks who want to separate the two, "You may have a desire to separate the two, but the data and the national studies make it pretty difficult to make that a rational argument."

What policies are in place to combat disproportionality?

One program that I am extremely excited about is Alternative Response. It's a different route to avoid a traditional investigation starting at the entry point. It's your very low to moderate priority sort of cases, where you don't have as high of risk factors going in and you're talking with the family about what they can do to keep the children safe by using services, those cases where really what the family needs is some community support. They need to get some resources, food resources or just getting hooked up to social services at the county level. Situations with no need for a disposition, and families are willing to work with the agency. Alternative Response allows for that alternative investigation. And it's built on practices that we know work and we know that they work with families of color. It's engagement and collaboration. It's intervening at the lowest level possible and assessing and doing some community resource work with the family. If a caseworker goes out there and it's more significant, then they can route it the traditional route. If not, this is a case that's going to get closed.

What can CASA volunteers do both in their specific cases and also in working on themselves and challenging those implicit biases?

"I’m saying you broaden your horizons. Broaden the events you go to. Start by going to different celebrations across town."

One thing is working through it and processing through it, which means getting outside of your comfort zone, right? For some of our CASA volunteers, the only time they interact with a person of color may be the child on their caseload or the biological family of the child on their caseload right? Get out there, broaden your horizons, right? I’m not saying go out there and find that one Black person and say, “She said I needed a Black friend or a Latino friend.” I’m saying you broaden your horizons. Broaden the events you go to. Start by going to different celebrations across town. More than in January, February and June. By that I mean, beyond MLK Day, beyond Black History Month, beyond Juneteenth. For Latinos, do it beyond Latino History Month. All year, find the events that are going on. Go to Carver. Do your research. Start to read up so that you become more comfortable with information.

The other piece is becoming comfortable having the discussions with your children. There is probably a race and ethnicity difference between the CASA volunteer and the child they’re serving. They don’t want to acknowledge it. The child knows it’s there. It’s the elephant in the relationship. So you learn to become comfortable with it, right? Learn to have the discussions, how to have those courageous conversations. Learn that when a child tells you that something happened and that they perceived discrimination existed, that it existed because that child told you it did. Learn how to respond to that and learn that validation is key in those sorts of situations.

Familiarize yourself with the disparities. Start looking at things through a different lens so if you begin as an individual and you begin actually looking at the evening news and think about it in terms of how is this being played out in terms of race and ethnicity. And even if you picked up Vogue or GQ and you start thumbing through it and looking at it through a different lens, a racial lens, you’ll be able to start going, “Wow. I noticed that.” But the only way that can happen is if you open yourself up to doing that. So say to yourself, “I’m going to push my growing edge and I’m going to work to learn what I don’t know.” Most of the time, we don’t know what we don’t know. But once you’ve been made aware of things, it becomes your responsibility right?

Your child has an advocate who is not employed by the system and you have a voice, but you have to understand how your biases play into the voice that you’re using. And that’s also an understanding about poverty and really being able to ask what’s in the best interests for this child. Right? That’s being able to speak up if you don’t see that this child’s cultural needs are being met and really using that voice. I think those are the key things, really opening yourself up and also recognizing you have a voice and recognizing that your biases play into that voice and how you use it.